skip to main | skip to sidebar

My letter:
We went to Oliver's play on Friday. It was great. Olie got to have a few speaking lines because one of the other guys was gone. Aunt Cherie and Uncle Shaun were there. Olie even did a tribute to Uncle Shaunie by doing the Uncle Shaunie dance during the play. It was hilarious! It was a good crowd. The play really touches on a lot of thing missionaries and their families go through. The mom is complaining that she isn't getting any details in her sons letters (sound familiar?), and the missionary gets stuck with a companion that is at the end of his mission and is ready to come home. The lazy companion complains about the letters he gets from home because they ask if he has had any baptisms and that's all he has heard for two years! He says " This is where pride was invented. This isn't South Freakin' America!" hehehe The trunky companion (played by Jeremy Pace) says that if they reduce their efforts to 10 percent and just sit, they will get the same results with less work. Of course in the end, Elder Preston shows him the error of his ways. So no sitting! (If they do a video of it, we'll get one and you can see it when you get home. I'm sure you'll have an appreciation for it!
Any thing we can do for you? Are you needing anything yet? I know you had said you wanted your head lamp. You may have to wait until Christmas time. How is your new companion, Elder Milk? Is he a hard worker? I hope you are well matched this time! How is the language coming? Do you feel like you can speak at all yet? It has only been 3 months. There is a girl in our institute class that just got back from the Port Alegre Mission and another guy that served in Brazil, so if you start writing in Portuguese only, no worries, I can get it translated! There's always Roseanne although they have decided to go to the ward they live in so we never see them.
Eliott's reply:
What was the name of Oliver's play? It does sound like fun!!! I would love to see it when i get back! We could make a whole night of it!! Woopie!! Go my rockstar brother!! I know this Dude is gonna be famous.. at least on youtube... hahaha. Oh man... it may have been a good thing that i was n't there cause i probably would have peed my pants... ahahahah. Mom, my brother is rockin!!
ok, ok. I get the hint. I can write more to you!! You guys are now hanging out again with the paces?!! YEAH!!! I miss the crrap out of those guys!!! Well, it is true that baptisms happen more often, but its because the people are prepared to hear... not cause the missionaries are the best. No sitting is right... heck.. my new companion has a hard time making up his mind where to go and we usualy back track the same spot about three times a day, but no worries, he is still getting used to the area. He is a good worker, but he freaks out a little when he forgets stuff and a little hard on himself. He needs to relax just a little bit. Well matched i think. I am taller than him too;) I think i have been really blessed. My first two companions were on the opposite sides of the spectrum so therefore i can learn from both and be perfectly in the middle! right on huh? Holiday today too... everything is fechado!! crazy. Usually the center of the city has a significant amount of people... but not today. Brazil Independance i think.

Okay, so there is this family that has been being taught for about three transfers now i think. The Dad is a member of a couple of years and his wife was baptized but never confirmed or records were lost or something(and she smokes now). They have two kids. One is married and has the cuttest little brazillian baby you have ever seen!!! I bet dad would die to hold her. I kinda am. Anyways... And the other is about 15 i think and he loves videogames. We were there last night and Elder Leite taught about repentance and stuff and we are trying to get these guys into the water. It was a great lesson and the spirit was way strong there, but that wasn't the best part. The best part is when William (son-in-law) said the closing prayer... Oh my heck!!! i almost cried!!!! and he really really wants to be baptized with his spouse!!! It is so awesome to see what the spirit can do for these people. I know that we do some but i think all i can do is be there for support and do my best to invite them to open their hearts to the spirit... but all is well. We are expecting about 17 or 18 baptizms for the four of us in the next three weeks!!! Sweet action huh? Hey, any idea how scott is doing?
Posted by Eliott at 4:48 PM 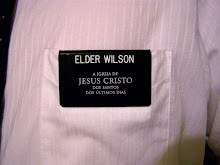 Keep in touch... Just use the Mission Home 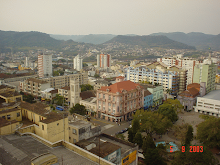 This is a shot of colorful Santa Maria

Where in the world is Elder Wilson?

Eliott
Welcome to elderelio, where you can check in periodically to keep track of how Elder Wilson is doing down in Santa Maria Brazil. We will post photos and emails, update transfers and other important info. We are so excited for Eliott and proud of his decision to serve a mission! He is awesome!